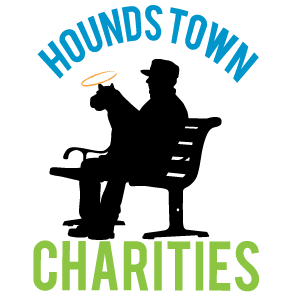 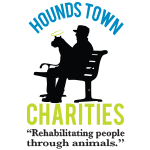 Many of the dogs at the highest risk for euthanization in our local shelters are labeled “red” for behavioral issues. Many of these dogs are simply misunderstood, and their issues are related to their environment. With the right person to teach them to trust, and to work through these issues, these dogs can thrive in a home environment and make wonderful companions.

In November 2015, Hounds Town Charities reached out to a local veterinary hospital to offer behavioral rehabilitation services to this former bait dog, who had been surrendered by his owner after severe neglect and abuse. Bound by his feet and left outdoors with little access to food or water for months, Cappuccino nearly lost his life. Medical staff were unsure they could save his legs. After months of recuperation, and a long stay at Hounds Town Charities, Cappuccino now enjoys his favorite activity: running with the legs he almost lost. Cappuccino is still up for adoption.

Who knew that two dogs labeled dog aggressive would end up becoming best friends during their time with Hounds Town Charities! Dill, a Town of Brookhaven dog, was teetering dangerously close to the edge of being put down for behavioral issues including leash aggression. Volunteers and advocates at the shelter reached out to Mike for help and soon after, Dill began the charity’s in-house rehabilitation program. After a few bumps in the road, months of training, and support from fellow homeless dog Cappuccino, Dill was adopted a few weeks after graduating our program. His family understands how to manage him properly, which is all Dill needed.

Fiona was only a tiny pup when she was saved by a local rescue group from a life of dog fighting and neglect. After hearing her story, Hounds Town Charities offered to foster Fiona and provide her with rehabilitation training and socialization. Fiona was adopted several months later, and she now lives the life every dog deserves.

Paris, a young pit bull mix with a spunky personality, had been at the Smithtown Animal Shelter in New York for several months before the Director of the shelter reached out to Hounds Town Charities and Mike Gould for help. As a hyper young pup, Paris had been adopted and returned several times. Her recent visit to the shelter was her last shot at a forever home. After several months with Mike and the charity staff learning manners, Paris was adopted by a loving family right before graduation. She now enjoys the life she always deserved!

Diamond was taken in by HTC as a foster in 2013, after she was picked up as a stray by the Town of Hempstead Animal Shelter. She has been living at Hounds Town USA ever since.

Spike was surrender to HTC by a state department employee who was reassigned to an overseas embassy which banned dogs! Spike has been living at Hounds Town USA along with his BFF Diamond ever since.

Both dogs have been through Hounds Town University’s Obedience programs. These two fur-riends are the best of pals! They would love to be adopted together, but any home would do. They’ve been homeless for so many years now and deserve a family of their own.

After years in a shelter, these pups got a fresh start with Hounds Town Charities

WE NEED YOUR HELP

Donate Today to Help Us Help Them

Email us to inquire about how you can help sponsor or adopt Diamond and/or Spike or to nominate a dog in your local community who may be in need of rehabilitation.